Many studies have been conducted to test the effects of marijuana use on mental abilities. In one such study, groups of light and heavy users of marijuana in college were tested for memory recall, with the results given below (based on data from “The Residual Cognitive Effects of Heavy Marijuana Use in College Students,” by Pope and Yurgelun-Todd, Journal of the American Medical Association, Vol. 275, No. 7). Report the p-value for the test. Use a = 0.01 to test the claim that the population of heavy marijuana users has a lower mean than the population of light marijuana users.

STEP 1: The hypotheses are

STEP 2: This test corresponds to a left-tailed test. We’ll use a z-test because the sample size is big enough to use normal approximation

STEP 4: The significance is

, and therefore, the critical value is

. The rejection region is

STEP 5: The z-statistics is computed with the help of Statdisk as 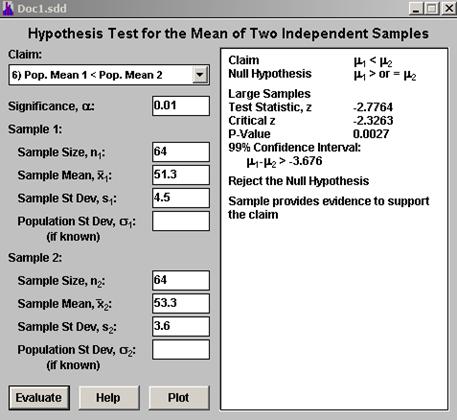 The z-statistics is equal to

STEP 6: We reject the null hypothesis. That means that we have enough evidence to support the claim, at the 0.01 significance level.