he bar graph below shows the number of car accidents occurring in one city in each of the years 1993 through 1998. The number of accidents dropped in 1995 after a new speed limit was imposed. Why is the graph misleading? How would you redesign the graph to be less misleading? Explain your thinking. 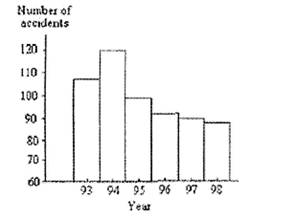